“I felt sure that the curse had passed forever..” 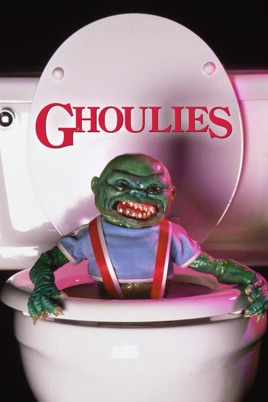 The image of a demon bursting out of a toilet bowl is loaded with all sorts of implications. Yet believe it or not, I never got around to watching the film until this write-up and after giving it a looksee, the infamous ghoulies are unfortunately largely ancillary to the film’s plot.

Boyfriend and girlfriend Jonathan and Rebecca return to Jonathan’s father’s estate after the senior Graves dies. In short order, Jonathan becomes intrigued with the unknown happenstance that lead to his family’s abandonment of the grounds, eventually this interest turns into an obsession with an occult book he finds owned by his father.

With cheesy ghoulie puppets and only the barest hint of a plot, Ghoulies is definitely B-grade schlock for fans of lo-budget horror. Despite this, Ghoulies was successful on release and turned into a franchise with three follow-ups to the initial film. Many horror fans have a soft spot for a franchise known for poor puppet design and claims of infringement, mostly for the films’ campy tone and unique, if incredibly obvious puppet designs. And where did these little monsters come from? They were of course summoned thanks to the Grimoire of the elder Graves – a title-less spellbook perfect for D&D tables everywhere!

Published by Jesse B

This site uses Akismet to reduce spam. Learn how your comment data is processed.